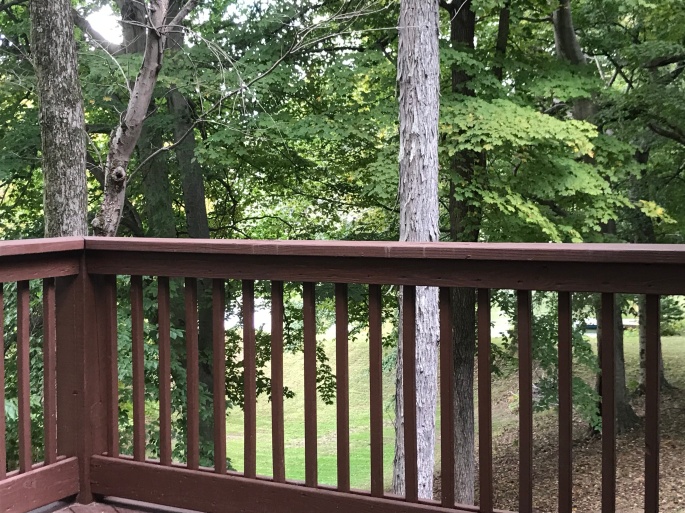 The pandemic has changed the way we do everything. All visits with my friends and family are outdoors and that is fine in the nice weather we’ve been having. Recently I was invited to a friend’s house in Floyd Knobs, IN. It is in a beautiful setting with trees of all kinds around the house. It is often referred to as the “Tree House” because the deck surrounding the house is in the tree tops.

We had a nice visit, solving all the world’s problems as we often do when getting together. Without the Corona Virus I probably would not have spent several hours at the tree house. I am grateful for that afternoon.

I keep trying to find the positives, the gains, during this time of so many losses.

Most of us, if not all, have friends. There are many kinds of friends and we need all kinds. Some we party with, with others we may share our deepest secrets. There are those who call and check on us if they have not heard from us in a while. Some help us fix things and if we are lucky there is at least one who provides us with a delicious meal now and then. All are needed. All are valuable and precious. We strive to be the kind of friend others need.

Recently I’ve had an opportunity to appreciate “behind the scenes” friends. They are precious people in our lives who may even be related to us and they give quietly with no thought of repayment.

A few hours prior to an event recently I saw men and women working hard arranging tables, chairs, and decorations. I saw linen tablecloths being steamed and candles being lit. People were delivering food and drinks. It was hot. Each person was red-faced and sweaty, but it was an act of love. These are friends who should never be overlooked, working without fanfare, giving of themselves.

Fred Rogers, a.k.a. Mr. Rogers said when he was scared his mother always told him to look for the helpers. That was good advice. Many times we must look behind the scenes to find them.

“I get by with a little help from my friends.” John Lennon

One day my daughter said to me, “Mom you have so many friends named Pat!” And I realized she was right. I truly do have a lot of friends both present and past named Pat and each has been a blessing.

My first Pat was a cousin born six weeks before me and we grew up more like sisters. When we were little I called her Patsy Lou (for Patricia Lucille), but later as a preteen, she became Pat. We both became nurses and we argued, agreed and mostly were just always there for each other until she died of leukemia.

Currently, there are Pats in my life who are more varied than their names might suggest. One is a brilliant writer, one a talented artist, another is a good neighbor and cat sitter, one lives several states away and still stays in touch. There are and have been others too numerous to count as they sometime say in lab results.

A Pat from the Past

During part of the 1960s and 1970s, we lived in a small neighborhood in the suburbs. It was a great place to raise our two daughters. It was also an innocent time. Kids ran and played and rode bikes and stayed out after dark playing hide and seek. They knew they had parental eyes on them, but still, it was a time of freedom. Each child trusted their friends’ parents as they trusted their own.

There was a neighbor named Pat who was not a great deal older than me, but she taught me so much, mostly by example. She was an RN and although not consciously I followed her into the nursing profession. It wasn’t that she talked about her job, but I knew she was good at it and I wanted to be like her.

One Sunday while my family was at church I stayed home to make chili for a neighbor who was injured in a wreck. The chili was really hot. It burned up our kitchen. The remarkable thing though was that Pat showed up after the firetruck had departed and began to help. Long after the insurance was settled and new appliances were installed Pat came back with her cleaning tools to help me rid the house of stains and odors. That is a real neighbor.

When one of our daughters had an accident on Halloween night requiring a trip to the hospital, Pat took our other daughter trick-or-treating with her children.

When I went into labor with our third pregnancy and subsequently miscarried, it was Pat who comforted me, instructed my husband and again took care of our daughters while we went to the hospital.

There are few people like this woman and I wish you had known her too. I do not know how I became so fortunate to have Pat G. and so many other Pats in my life.

“Walking with a friend in the dark is better than walking alone in the light.” Helen Keller

NOTE: There are many friends in my life today and I would not want to face life without any of them, no matter their names. You surely know who you are and I love you.

Several friends have asked me why I deleted my Facebook account a few months ago. They miss my comments and photos. They miss me. I do not doubt this because I miss them also. I miss their updates and photos and I miss being in contact. But we see Facebook through the lens of their own relationships. Friends, grandchildren, lovers, church members, baby photos, kitten videos, all good I thought.

I was one of over 2 billion users, showing off with little to no thought of how my personal information was being used. I didn’t read the terms of the agreement or try to understand the privacy settings. I was having fun and for free!

Giving up Facebook was not something I did lightly. After being a member for so many years it was a sacrifice. One thing I’ve learned though and not unexpectedly is that while being a member I was sacrificing time. The time that I could be doing more productive things but this is not why I left Facebook.

“I have been betrayed. Facebook used me and used my friends and our data. More importantly, Facebook and Mark Zuckerberg have endangered the democracy of the US and the safety of democracy globally. After 10 years of FB membership, I am hurt and disillusioned. I will never be back and will encourage others to take the same step.”

Experts believe that Facebook, more than any other social media platform, has facilitated the spread of fraudulent news because of its vast number of users and the many mechanisms it offers for sharing information quickly.*

Facebook lost over $120 billion in stock on July 26, the largest one-day stock loss in history when investors dumped over 20%. One might say it serves them right, but how many millions did they make off us over the past three years or so? Also, Mark Zuckerberg doesn’t miss his $16 billion loss any more than I’d miss one hundred. He is a multibillionaire, down from third richest person to the sixth. I do not begrudge him his wealth, but I vehemently resent how he earned it off of unsuspecting members, like me, like my friends and family.

Those fun Facebook quizzes were designed to learn our preferences and our weaknesses which were played upon in advertising and bogus news. I didn’t do many quizzes but learned that when my friends did so it opened up my data. This devious plan duped the highly educated professional just as it did the uninformed.

Zuckerberg has a history of saying “I’m sorry” but that is not enough when things stay the same. Facebook VP Carolyn Everson recently made the following statement:  “The entire company is focused. We’re adding over 10,000 people, we’re using technology to help us find bad actors and bad behavior.” It doesn’t take that many people nor technology to figure out that the bad actor is the company founder and CEO.

I’m enjoying the extra hour or so I used to spend on Facebook each day even though I do miss folks I care about. True friends will stay in touch, the other few hundred not so much.

I hope that others have reached a similar decision, but I am only responsible for my own and I refuse to be used to weaken the democracy of the country I love.

Sources: CBS This Morning and *Alicia Shepard of USA Today and NPR.

“Where you see wrong or inequality or injustice speak out because this is your country. This is your democracy. Make it. Protect it. Pass it on.”                Thurgood Marshall